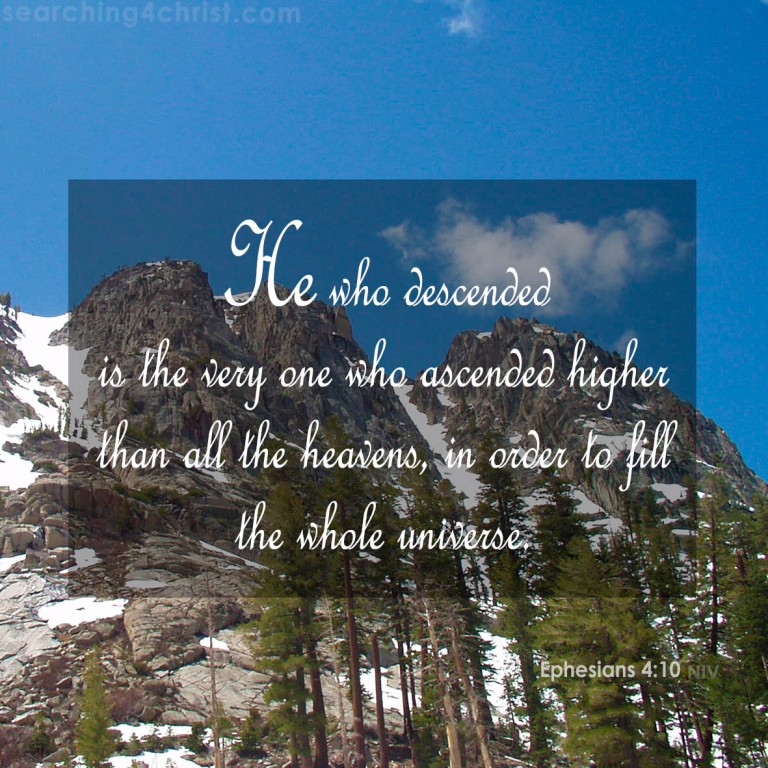 He who descended is the very one who ascended higher than all the heavens, in order to fill the whole universe.)  Ephesians 4:10  NIV

It was the second time a family attempted reaching the highest summit in a certain western state.  The first try had failed due to altitude sickness.  But the father and son team was determined this time.  They spent most of the day winding their way up the steep path.  Once again, the lack of oxygen began to take effect.  Two of the children began to have headaches and started to be sick.  But the summit was near.  This time they reached the peak and wrote their names in the registration book for successful climbers.  From the top, they were rewarded with a magnificent view of God´s creation.  How high have we ascended in our journey up to God?

The One who came down to rescue us is the One who has ascended higher than all!  Jesus descended from the Father to become our Way unto God.  To those precious few who care to reach spiritual heights, Christ is essential.  If we can follow Him closely then we can reach the Peak!  If we have Jesus on our team, no amount of trials will remove our chances of gaining God.  If we are willing to exert ourselves and are determined, reaching spiritual heights can be attained today.  Shall we make it our goal right now to ascend higher unto God with the One who goes before us?

Set our hearts on reaching You.  Let us not rest until we have ascended higher in our spiritual pursuit!  Draw us so near to our Guide that success is assured and we will soon be there!