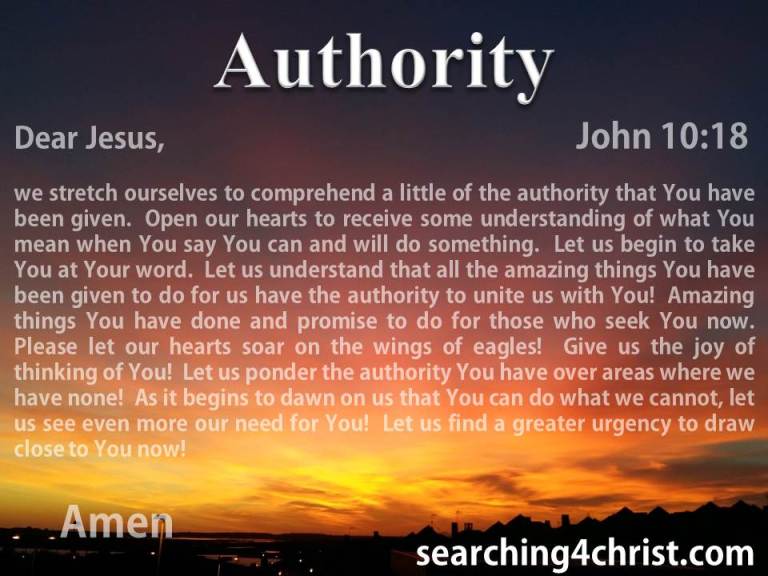 One who comes close enough must admit that the Christian has the supreme delight to consider some pretty amazing concepts.  Unfortunately the unbeliever misses out on this thrill of letting our hearts soar with thoughts or our mighty God.  One such thought is this one of authority.  Even the most rebellious amongst us must admit that we all are bound by some certain restraints.  We may say that the rules do not apply to us but we would only be fooling ourselves.  We could say that the law of gravity does not have control over us, but step off of something high and see what happens.  We may think that we are invincible but stand in the way of a train or wait a couple more decades and we all must realize our fragile hold on life.  But in the face of the parameters which define our existence, Jesus states that authority has been given unto Him.  He says He has the authority to live, but willingly lays it down.  He also says that even though He lets men kill Him, He can then take up His life once more.  Incredible!  Wow!  Is this a big enough concept to consider?  Does it thrill us to the core to meditate a moment upon such authority?

As amazing as this may seem, perhaps it is not the only jewel of worth to be found in our Saviour´s statement of authority.  Even if one had the right to do something so drastic, would they need a big enough reason for actually going through with it?  Nobody would ever have to go so far unless there was a need.  Jesus says that He was willing to fill a need.  He was willing to go through the pain, the suffering, the death and the grave, all in the hopes of restoring us to God.  He was willing to go through with it for us!  We who would believe in Him were His motive.  He would do it so that we would have a Way to come unto the Lord!  It is so that He can become our Way!

We see this unfathomable authority of Jesus to lay down His life and take it up again.  We recognize that the size of His heart to do that for a wayward race is more than we can understand.  But this brings us to a lofty thought when He says He receives this command from His Father.  There is a mighty and intelligent Being Who is behind all the wonders we have considered so far!  There is One so great that He is able to order that these powers and authorities are given!  He dishes these out as He sees fit!  The Father commands something and it can be, and is done!  Even so far as having His Own Immortal Son lay down His life, then take it up again!  Even so far as redeeming an unworthy and self-serving race of people!  Can we let our thoughts fly so high as to ponder such authority?

Dear Jesus, we stretch ourselves to comprehend a little of the authority that You have been given.  Open our hearts to receive some understanding of what You mean when You say You can and will do something.  Let us begin to take You at Your word.  Let us understand that all the amazing things You have been given to do for us have the authority to unite us with You!  Amazing things You have done and promise to do for those who seek You now.  Please let our hearts soar on the wings of eagles!  Give us the joy of thinking of You!  Let us ponder the authority You have over areas where we have none!  As it begins to dawn on us that You can do what we cannot, let us see even more our need for You!  Let us find a greater urgency to draw close to You now!