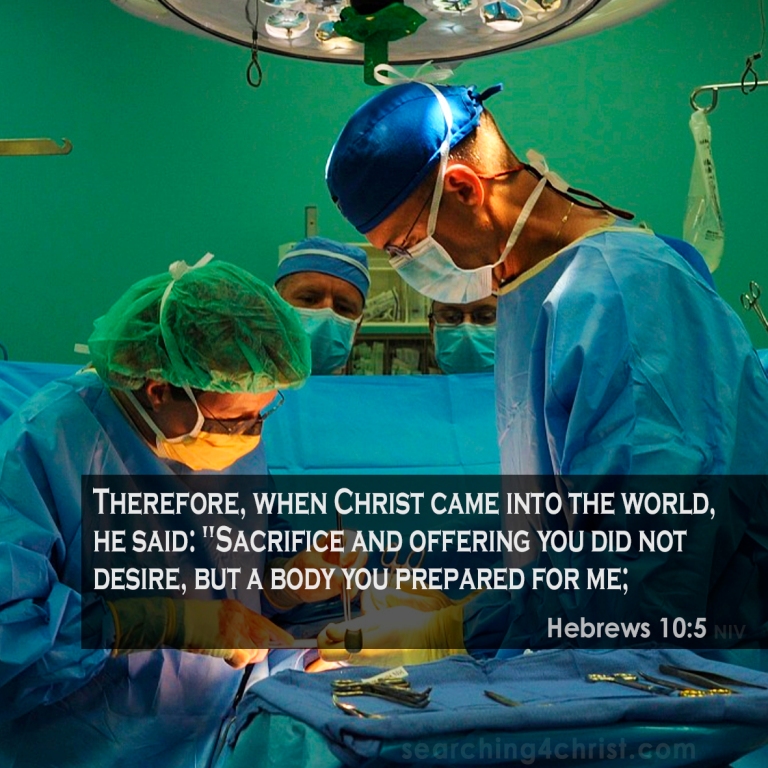 Therefore, when Christ came into the world, he said: “Sacrifice and offering you did not desire, but a body you prepared for me; Hebrews 10:5 NIV

A man lay on the operating table while the anesthesiologist applied the epidural injection and put his lower body to sleep. They were going to put a new ligament through the inside of one of his knees that a fall had broken. A sheet hung down at the level of the man´s waist so that he would not have to watch the frightful things they needed to do to cut, drill, remove and replace the ligament. When the drug took its effect, the doctors started their messy work. The patient noticed that a cupboard next to the bed was of polished shiny material. This acted as if it was a mirror. He could see the doctors working over his knee. He watched curiously as they made holes and inserted tubes for the draining, the camera, and cutting tools. At times, blood squirted out, staining the doctor´s aprons. They lifted, bent, and pried at his leg to screw the new ligament in place. All the while, he felt as if the leg was laying straight with the other one. Do we realize what a miracle, and what a strange thing God has accomplished in bringing us our Savior in Body and flesh?

For God to put the Divine in a flesh and bone human body was a miraculous feat indeed. That he would go through all the trouble for a stubborn and straying people is an even greater wonder. But a sacrifice was needed to repair the relationship that God wants to have with His people. Shall we let our hearts be moved by the extent of God´s Gift of love unto us? Shall we embrace the sacrifice Christ made by coming in body and giving it up for us?

Thank You for loving us and saving us even while we strayed from You. Let our hearts be moved to seek You now, we pray!