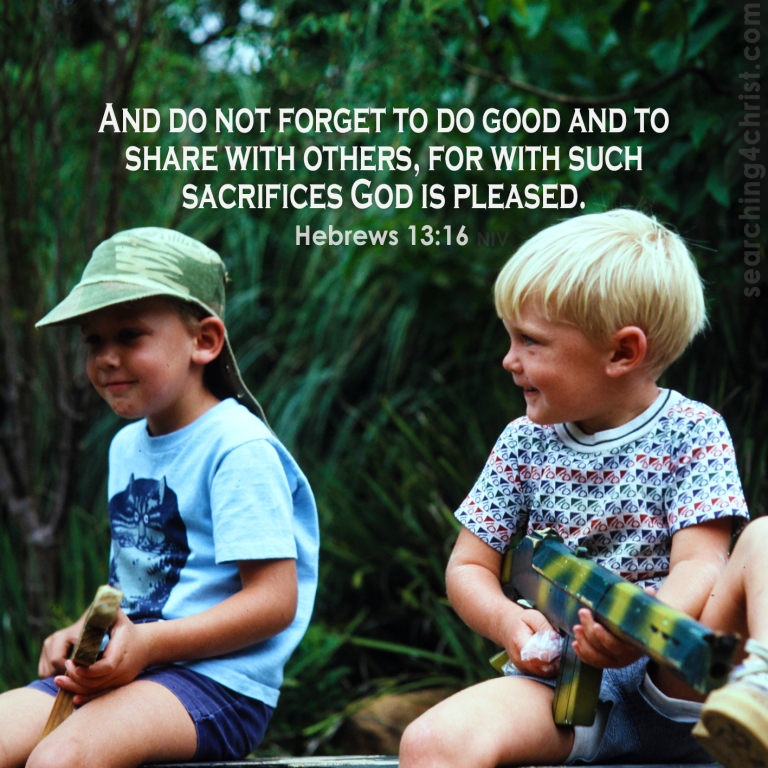 And do not forget to do good and to share with others, for with such sacrifices God is pleased. Hebrews 13:16 NIV

The first time the other kids met the boy, they had just arrived in a country that was going through a civil war. The boy, whose parents they had come to visit was playing in the garden. When the new children approached him, he had a wooden rifle in his hand and a camouflaged cap on his head. For a moment the boy just stared at them holding the rifle as if it would protect him if they were not nice. But after exchanging only a few words of greeting, the boy asked if the new children wanted to play. He took them around and showed them what he had to play with. From that moment on, what was his was also theirs. He even let them play with the toy gun that he cherished in those times of unrest. How well have we learned to share?

Years later those children have children of their own. They are trying to teach their kids to share in a world that thinks only of self. The boy who shared as a child still has his door open wide and he invites people to come. His heart of sharing is what the Christian´s heart should look like. We of all people should know that what we have been given is not to be hoarded selfishly. The more cheerful the giver, the greater God will smile on us. We may have to let go of things that we would like to hold on to in this world. But the greater rewards that we do not yet see in Heavenly realms are worth it. Shall we pray that God will take away our hearts of stone and help us love and share with others until we begin to resemble our Savior Who gave everything He had out of love for us?

Let us become experts in sharing the blessings You shower upon us, especially when that blessing is You, we pray!