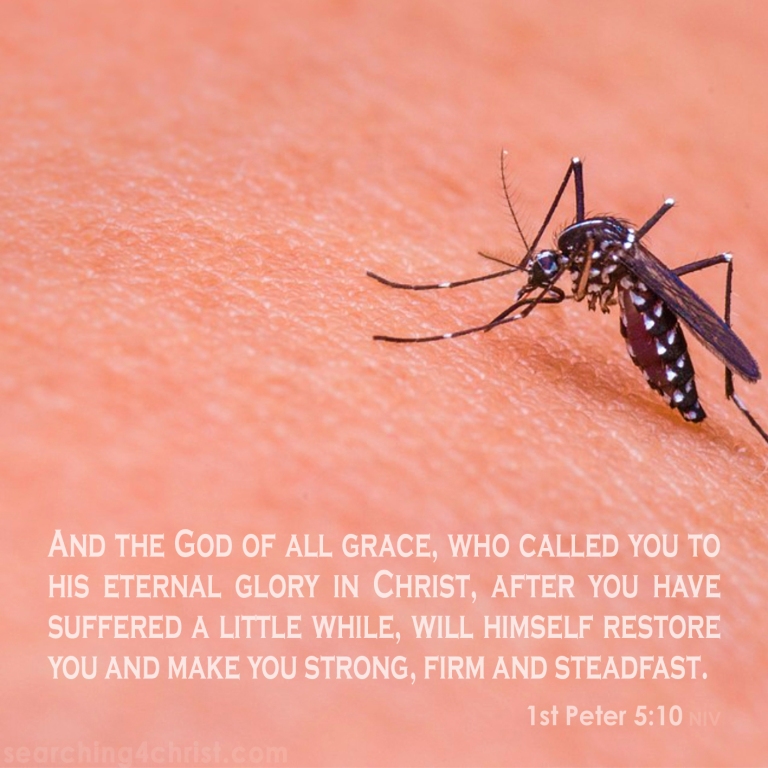 And the God of all grace, who called you to his eternal glory in Christ, after you have suffered a little while, will himself restore you and make you strong, firm and steadfast. 1st Peter 5:10 NIV

The mosquito had gotten the better of him. He fell deathly ill. Malaria set in, and with it came bouts of fever and of chills. The patient grew so weak that he could hardly move, hardly talk, and hardly stay alive. In fact, if he spoke at all, you could hear the despair in his feeble voice. Sleep was the only thing he could do but even that was difficult and interrupted. Those who were there to care for him had to change the sheets and blankets often. He was burning up and sweating, but at the same time, he felt like he was freezing to death despite the muggy heat of the rainy season. Have we ever called on God to ease our suffering or to make us strong?

In this case, malaria did not win the battle. God let the young man live to see more days. He provided experienced caregivers, the right remedies, and slowly allowed his strength to return. But those who have suffered from a severe case of malaria will testify that they are not the ones in control over their health. God has called us to a favorable outcome too. He has invited us to His glory. We may still have to suffer here for a little while. But if we will do just one thing, if we will do it as if our lives depend on it, then the Lord will restore us. He will make us strong. Jesus is more than able to make us firm and steadfast in the face of all that afflicts our human race. Who wants to have a Friend like Christ today to look after us and restore us to eternal health too?

Come to us in our affliction. Care for us and restore us to life abundant forever by Your side, we pray!