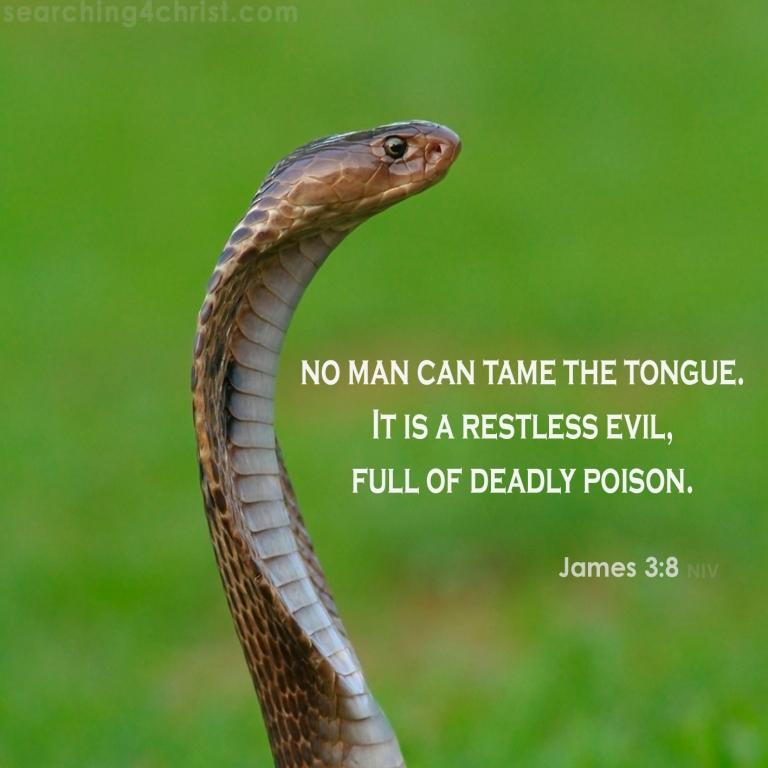 but no man can tame the tongue. It is a restless evil, full of deadly poison. James 3:8 NIV

They drove far out of the city into the African forest. When they arrived at the farmer´s house they had gone to visit, he was nowhere in sight. The children were anxious to get out of the car and explore. The swimming pool was empty except for a few inches of water at one end and some dry leaves that had blown in. The children wanted to see if there were any frogs. They jumped in and as they approached a frog to catch it, the leaves in front of them erupted. The fright sent the children running out of the pool and across the front lawn of the house. Just then, the oldest boy put his hands to his face and began to scream. His brother turned around to see what it was that had sent them running. He saw a snake, only about two feet long, slithering into the water to make its getaway. What deadly poison do we face today?

As if God had planned the whole scene, the farmer showed up at that moment. He took the boy into the house and immediately began washing the venom from the boy´s eyes. It had been a spitting cobra, which blinds its enemies and its prey by shooting venom into their eyes. Our tongues are also full of deadly poison. Even one careless word can be packed with venom that hurts. Relationships can be painfully affected. Unfortunately, we can never learn to tame our tongues on our own. We need the Lord. We need Christ´s help. We need Someone who can guide our hearts and our words and turn our situations into the work of God!

Come close to us, so close that we will know what to say and how to say it. Guard us against the poison of our tongues so that we do not harm others but bring them to You, we pray!