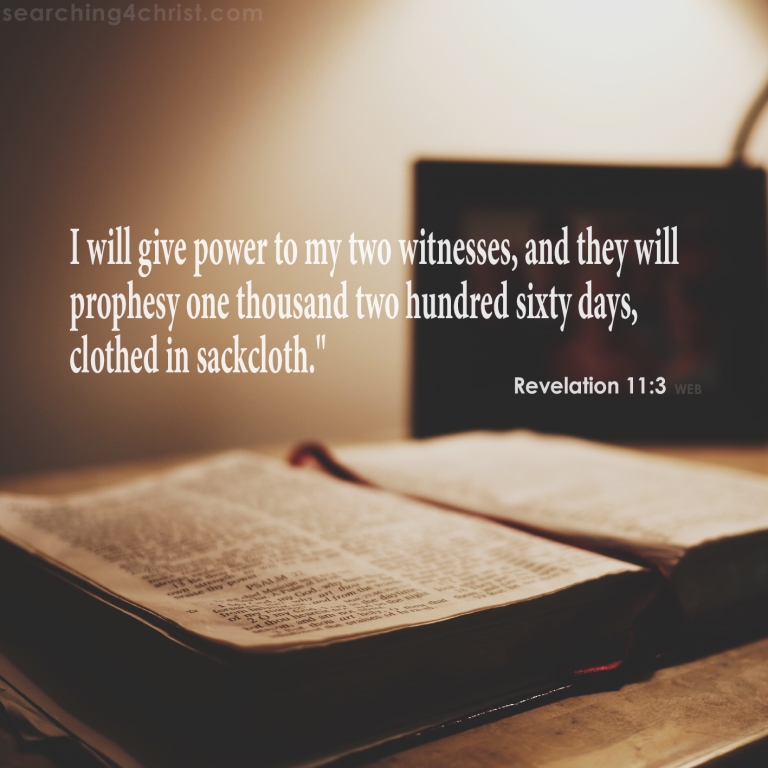 I will give power to my two witnesses, and they will prophesy one thousand two hundred sixty days, clothed in sackcloth.”   Revelation 11:3  WEB

To finish her college degree as a teacher, one woman chose to study an added minor degree. Her choice was religion. It gave her the qualification to teach students religion, which was great, given that she lived in a predominantly religious country. There was only one real problem with the degree though. She was taught a great deal about the structure and mechanics of the Bible and religious interpretation, but she received little of what it all was meant to reveal. She had not come to know or understand anything of the two witnesses we have before the throne of God. Do we?

Nearly every person who looks up to God in hope will readily agree that we are living in a time that is growing very near to the end of God´s great revelation. His plans are soon to be revealed and His Kingdom will be established. We could look forward to some great witnesses to arrive on our scene to tell us of the Lord. Or, we could look to the past. But what might be of much more use to us today is to look at what we do have to teach us of the Divine and what He would reveal to us now. For this, we do have two great witnesses with us. We might know them fairly well. They are fantastic witnesses of the love and care that God has given us. They also teach us endlessly of His wonders. These two Testaments may not be dressed all that great these days. But it would still do us good to get to know them. Shall we embrace them and learn well what they have to say?

Let us use every witness we have around us to increase our awareness of You and draw us nearer to You, we pray!